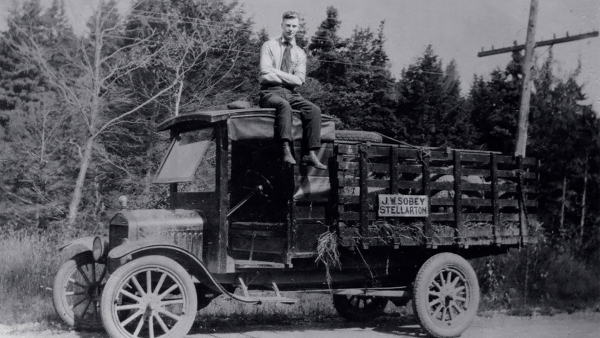 Frank H. Sobey (1902-1985) grew up in Stellarton, NS where his father, John William (JW) Sobey, operated a meat business.  In his teens, Frank started working in the business, which now included a meat delivery route and a walk-in store selling local farm products, feed, and related provisions.  Frank used to travel the back roads of rural Pictou County buying lambs and claimed he “learned more about sound business practices dealing with farmers than I could have learned any other place.  There’s no other way to survive the risks of farming.  The successful farmer was a cost accountant as well as a hard-working agriculturist.”

Frank indulged his early interest in business, reading such publications as The Financial Post , making modest investments, and upon leaving school, enrolling in a local business college.

By 1924 he had formally joined his father in the store, where he persuaded him to expand to a full line of groceries.  Two years later they opened a 2nd Sobey’s store in New Glasgow.  By 1939 Frank had grown the grocery business into six regional stores while his love of the movies was reflected in his ownership of local theatres.

In 1946, Frank sold the cinemas and bought Barkers, a regional chain of eight grocery stores, a bakery, and a warehouse, and incorporated Sobeys Stores Ltd., the first step in the chain’s expansion.  The next year he opened two groceterias:  self-serve, cash-and-carry stores, novel for these times when stores were full service and mostly credit.

Meanwhile, in 1937 Frank was acclaimed Mayor of Stellarton, a hard-luck mining town that had suffered mightily during the Depression.  During his 22-year uncontested tenure, Frank upgraded the town infrastructure, paved streets, planted hundreds of trees, and finagled money from the province to put the unemployed to work carrying out these improvements.

In 1957, upon the request of newly elected Premier Robert L. Stanfield, Frank became president of Industrial Estates Limited, the province’s industrial development agency.  He served successfully, without salary, for 12 years.  Among the industries attracted to Nova Scotia was Michelin Tire which operates yet three plants in the province.  As Premier Stanfield said, “You cannot hire or buy his kind of talent.”

Although he devoted much time to the province, Frank kept growing his business, with his three sons now in senior roles.  By 1965 Sobeys were operating 46 stores in Atlantic Canada, plus two on the Gaspe Peninsula.  Their real estate investments grew beyond stores to shopping centres, the first being the Avalon Mall in St. John’s, celebrated as the first in Newfoundland and Labrador and the largest east of Montreal.  By 1976 real estate came under Empire Company Limited, Sobeys’ associated investment arm which also owned drug stores, car rental and dealership enterprises, insurance companies, and cinemas.  In the year of Frank’s death (1985), Sobeys’ grocery business had grown from a single store to be the major food distributor in Atlantic Canada with 5,281 employees at work in its 100 grocery stores and wholesale and food service divisions.

Among Frank H. Sobey’s other achievements and honours, he was a founding member of the Atlantic Development Board, a Director of the Confederation Centre and more than 20 companies, recipient of the Canadian Industrial Development Award, Knight of the Golden Pencil, and three honorary doctorates.  He was also inducted to the Canadian Business Hall of Fame and to the Order of Canada.